Tonight at The Game Awards, a Soul Calibur VI Announcement Trailer premiered. It’s short with mainly a young Mitsurugi and Sophitia. The narration begins, “Just as shadows are cast where there is light, history hides away more than one truth,” so I take that as a hint of either a retelling of past events or new events in the past will be both though I suppose it could be some combination of those things.

As for other characters, there is little shown here. There is this part, I’m not sure who this is: 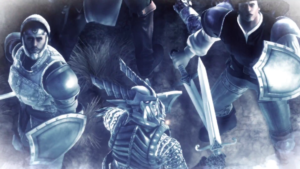 And the final shot which could be a new character, or not since the narration says, “Welcome back to the stage of history.”

I’m more of a Cassandra player than a Sophitia player so I hope she, Cassandra, is not erased from even being acknowledged as existing again since there was no mention of her, that I remember anyway, in Soul Calibur V. I want to see claws too, preferably with a long-haired Siegfried-Nightmare though that hasn’t really happened since Soul Calibur II. This likely look to the past sets the stage for such a character or one like him (“more than one truth”).

PlayStation Experience is this weekend so there might still be more on the game in the near future and if not, well, I’m sure I’ll hear about it from somewhere such as on Twitter or Andrew, who keeps up with gaming news.

I had given up on any more Soul Calibur games so this news is welcome as it is one of my more favored fighting game series.

You can see the trailer here on Bandai Namco Entertainment America’s YouTube Channel:

Please check out the gallery below for an ever closer look at some screenshots from the above video.

If you appreciate any of the work that went into making this post, please consider giving a tip to my PayPal account:
https://www.paypal.me/sonkitty