I have a fondness for a certain character type that is man, or mannish, and has black-feathered wings (hence my obsession with Devil Jin from the Tekken franchise) and given my fondness for David Tennant as well, seeing an image of him with black-feathered wings portraying a snake-eyed demon as promotional material for a Good Omens series premiering next year on Amazon piqued my interest. 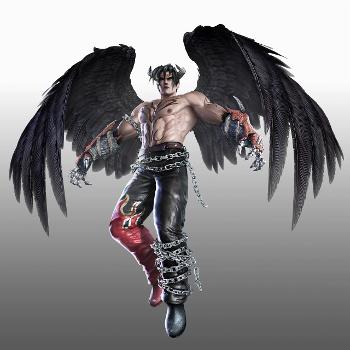 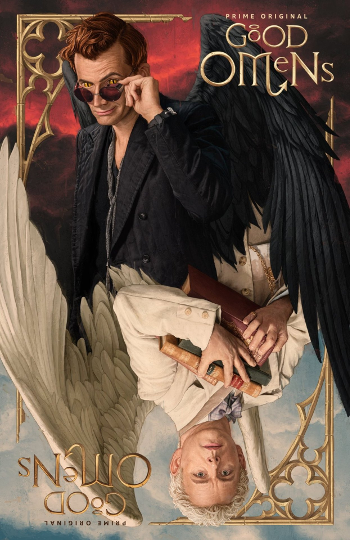 The person who originally tweeted the image that passed along my TL and was then quote-tweeted by me expressed surprise at my not having read the book. Good Omens is a novel by Neil Gaiman and Terry Pratchett. I have read two novels by Neil Gaiman: Stardust, because I liked the movie, and American Gods because at least one, though perhaps more, of my friends seemed to really like it. I used to follow Neil Gaiman on both Tumblr and Twitter and enjoyed his tweets and posts. I don’t want to get into why I stopped following him because I also re-follow people and there can be multiple reasons, not all of which I’d remember.

Anyway, back to the books: I didn’t exactly hate these books, but Stardust falls into one of the few cases where I would say the movie was better than the book, because it was kind of bland in comparison, and American Gods was a little boring and took me a long time to finish, so after that, I haven’t really been in any hurry to read more from Neil Gaiman. I have been meaning to read Terry Pratchett eventually, so I guess I started here with Good Omens.

If you are unfamiliar with the premise, it’s about a cast of characters preparing for the end of the world, including an angel and demon who like the world well enough to not see it end. Other characters include witches, witchfinders, the Four Horsemen of the Apocalypse, some kids, and more. Thankfully, there is a cast list near the beginning that was a helpful reference. Segments jump from place to place, character to character, so one can easily be lost when starting out on a first read.

Most of the Good Omens novel wasn’t boring though there was a part with witchfinders I found dull enough to take a break from reading and going back to coloring my web comic page before getting back to the story. It did break away from the characters I was more interested in, Aziraphale and Crowley (mainly Crowley), more than I would have liked.

This book was published in 1990, but racism should be called out in any age, so as a non-black light-skinned Mexican Native person trying to understand and do better in the ongoing, long fight against oppression in many forms, I’m going to point out some excerpts that sent alarms off in my head.

Most of the members of the convent were old-fashioned Satanists, like their grandparents and parents before them. They’d been brought up to it, and weren’t, when you got right down to it, particularly evil. Human beings mostly aren’t. They just get carried away by new ideas, dressing up in jackboots and shooting people, or dressing up in white sheets and lynching people, or dressing up in tie-dye jeans and playing guitars at people. Offer people a new creed with a costume and their hearts and minds will follow.

See, this book is supposed to be funny, and so the above is supposed to be a joke but “jackboots,” to me at least, is intended to conjure up images of Nazis who killed millions of people, very specifically Jewish people and “lynching” is literally hanging Black people to kill them because they stepped out of line. Lynchings still go on in the U.S. today. For an example I recall in the past several years, read the story about Lennon Lacy. I am pointing out the severity of this violence because while there is some research on the relevance of the fashion to these systematic killings, the specificity of their purpose, the intended power dynamic of outright genocide, is extremely important and should not be glossed over for a joke. Also, I’d say those people can be called really evil quite obviously. It’s a frightening time to see how many really evil people we all live with every day.

Here’s another excerpt that, intended to be funny or serious, certainly leaves me uncomfortable and questioning its purpose.

As soon as the car had stopped he had the back door open and was bowing like an aged retainer welcoming the young massa back to the old plantation.

These words call to the time of chattel slavery, which was an extremely violent atrocity whose effects are still felt today and so calling it to in this fashion as a simile for opening a door feels tremendously inappropriate.

One of the characters, Shadwell, is very clearly racist, even using the word “darkie” at some point with special expressed suspicion toward a Mr. Rajit while the narrative then brushes off this racism as tolerated because Shadwell hates everybody. I don’t think I’ve outright pointed out that both Gaiman and Pratchett are/were White, so I’ll do that now because I think these examples of diversion to the true power investment and dynamic of whiteness toward anti-blackness are a noteworthy and significant problem.

Now, for another obviously racist character is Madame Tracey, which is a real shame because I liked her aside from this point, but it’s kind of a big, flashing, awful, point. She does a seance as part of her services and during a major plot point, the reader learns the following in between her using a stereotypical “how” talking to her clients:

She had always understood that Red Indian spirit guides were an essential prop, and she rather liked the name.

The name referenced above is “Geronimo”. Soon follows a mention of another character figuring out how she doesn’t know who he was and that character not having the heart to tell her. I will try now to have the heart to tell any reader that if you find yourself in a position to put one of your characters saying and doing racist things without confronting that, challenging it, and working to be better, don’t.

I didn’t really care for the Four Horsemen of the Apocalypse, which really just made me want to re-watch that X-Men animated series, the one from the 90s, with the early Apocalypse episodes that had the Four Horsemen where Angel becomes Archangel (Death). It started about Rogue wanting to give up her powers and deciding to keep them. I liked those episodes, and I think perhaps those four will always be THE Four in my heart, not that War, Pestilence, and Famine were particularly interesting or developed in those X-Men episodes, they weren’t, it’s just the effect of a first impression and nostalgia. Maybe the colors too. Here is a screenshot of them from the episode Come the Apocalypse in season 1, for reference: 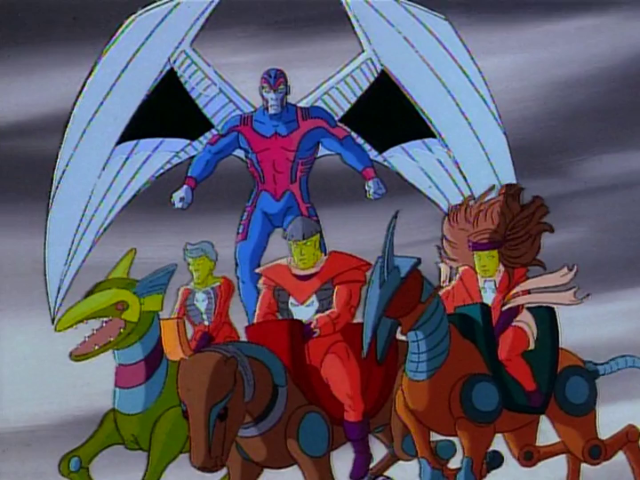 The character Crowley almost seems written for David Tennant, as I could easily picture him delivering much of the dialogue. I look forward to seeing at least that if nothing else when the series premieres in Amazon. If I do watch it, it really will be because of him and hopefully the rest will be done well enough to keep me interested. My other concern is that it might be gross. I do not like gross, and this story definitely has some gross parts. I don’t think I’ve watched an original Amazon series yet, but I have watched all of Jessica Jones on Netflix, which also featured David Tennant and part of why I watched that too. In my Jessica Jones review, I mentioned that it got really violent and gross, more than I could stand really, in the later part of the season but by then I was so invested, I finished it anyway.

Some kind of content or trigger warning would have been nice. I was really taken off guard by the extremely casual use of having a child using the anti-gay slur that rhymes with “maggot” and then later a guard taking pleasure at the thought of burning several such people. That particular word has always offended me a great deal. People really do die from this oppression in brutal ways. It hurts.

Good Omens was moderately entertaining, and I’ll be glad to have a reference if I watch the Amazon series. I would recommend it if you think it will have specifically something of interest to you, such as the authorial style of Neil Gaiman or Terry Pratchett or a broad cast for an end of the world, or religion-based fantasy. Crowley’s wings weren’t around or described much though, I’ll admit.