Hello out there, I haven’t done one of these since early November, so that makes it nearly two and a half months between newsletters and, my, how things have changed in that time in the most unexpected ways. That’s why I’m posting my commentary here first instead of below my list like usual.

Who knew that catching up on My Little Pony: Friendship is Magic on Netflix would result in a heavy Rainbow Dash obsession? I sure didn’t, but that’s what happened to me. I love this blue pegasus so much. She’s so cute, and fun, and aggressive, and fast, and strong, and flawed, and downright adorable. For the time being, she has surpassed Devil Jin as my favorite character ever.

What does that mean for The Jin Saga CV2 comic? I don’t know. Even before the Rainbow Dash obsession hit, I was really struggling with the last page over basic head shapes and positions. I’m not saying it’s a lost cause, but it has fallen down in priorities. I keep a notification up on Deviantart that at least two users marked my last chapter as a favorite so the work mattered to someone besides me, in case that helps motivate me.

This obsession change has resulted in a very confused place for my creative outlet. I am constantly writing Flutterdash fanfiction, but I don’t know if I’ll publish any of these, there’s not so much conflict or plot as just trying to work in some cute or fun or touching feelings between the two (Flutterdash = Fluttershy and Rainbow Dash, referring to them as a ship) and maybe have the other characters react to that. I am also working on a video about my love for the MLPFIM episode, “Sonic Rainboom” and trying my hand at a vector. MLPFIM vectors are prolific at Deviantart, and I’ve always wanted to be able to do them. Now that I know a little more about working in Inkscape, maybe I can do it or at least start learning.

I am easily distracted into reading other fanfiction and watching other videos, added into not sure where to prioritize which piece of work I’m doing, and it feels like I’ve come to a standstill on what I publish.

Nonetheless, I survived November and December. The fascism in the U.S. still at a scary point and worsening. I wish I could end these comments on a happier note, so I’ll say that I am trying to focus on things that make me happy and enjoying life. I managed to make some GIFs and a video, featuring that blue pegasus I adore, Rainbow Dash, listed below.

Here is Anna's CG art for Tekken 7. I found it at https://t.co/hdCGYDeVl7. I like the feathers and the red and black theme (because red and black reminds me of Jin's color scheme). I also like the sleeves. pic.twitter.com/dTWE9uNEQf

Flash Fiction: We Wanted to be Robots

Iori playing guitar in the last episode of KOF Destiny. I am eager for the next season to hopefully see a lot more of my favorite KOF character!

I made a batch of GIFs from a Kingdom Hearts 2: Final Mix cut scene shortly before the 1000 Heartless Challenge since the scene featured a lot of Final Fantasy characters.

I made some KH2FM GIFs you can find here: https://t.co/J31j5TnLT7. A couple of them were too big for Tumblr so I guess ya'll get a thread of them with the bonus two I couldn't put there.

In this Moment, over the course of Evo, I went over who played against who and won during the stream, when my time allowed, some commentary in between, and bracket updates for the Finals.

My favorite player, being that he is the best Devil Jin player in the world, placed 2nd, so congrats to Qudans.

I have returned to gaming! You might be wondering what I mean since I clearly have been playing Kingdom Hearts II Final Mix with my strategy guide videos and GIFs this month so what I really mean by that is I’ve been playing LittleBIGPlanet and foregoing certain other things at more times of the week than a Saturday or Sunday morning as I have with KH2FM. This could mean less from my creative endeavors, then again, maybe not because I see I still made time do some stuff over the month.

In between all that, my kid started kindergarten, which puts me in a position of maybe more time, maybe not. It’s hard to explain.

I’ve put off a certain thing in the works and realized said thing could take months or years if it ever comes to fruition at all. In any case, I set up a schedule for myself on my webcomic to try and release a final draft on the 7th of every month and am on schedule for that so expect page 3 within the week. So, for September, the main plan is that webcomic page. We’ll see how much more LBP playtime disrupts the other stuff.

I’ve written a summary of many things I worked on during May, here on this website and/or on Patreon. Please click on the link or read below.

We starting off June with some new digital art, Lydia (original character) sketch and lineart to serve as samples for a new illustration commissions page. The base pose is traced from stock provided by SenshiStock. It is the first in a Draw Everything June challenge. Will I do more in the challenge? I’ll be keeping an eye out on the stock and decide as the month goes on. 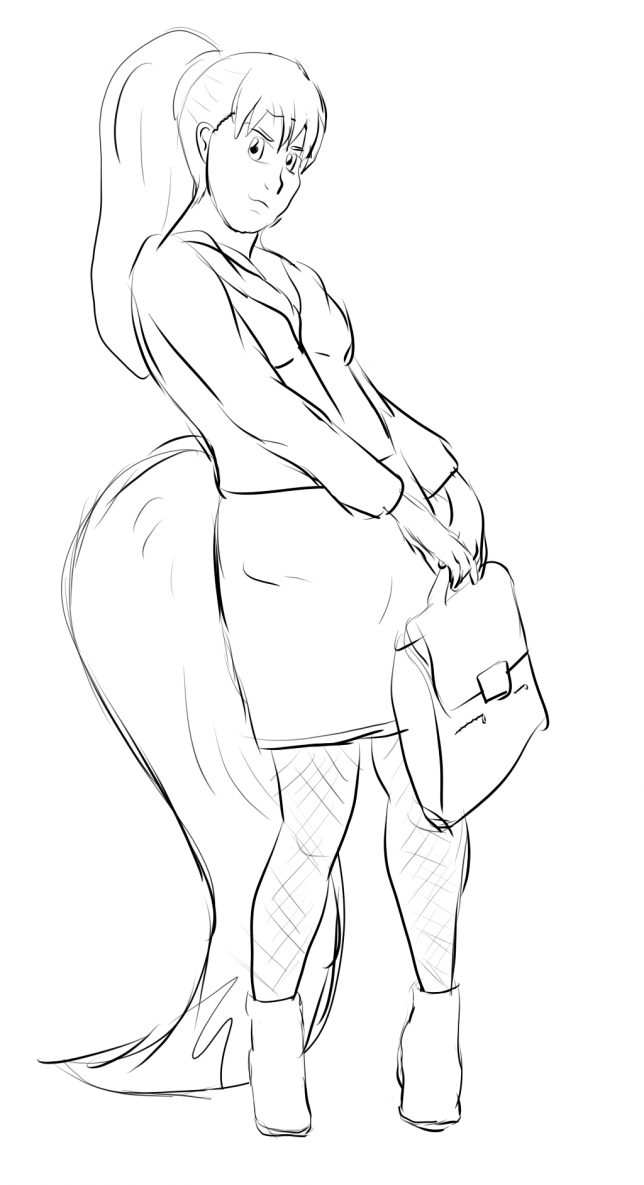 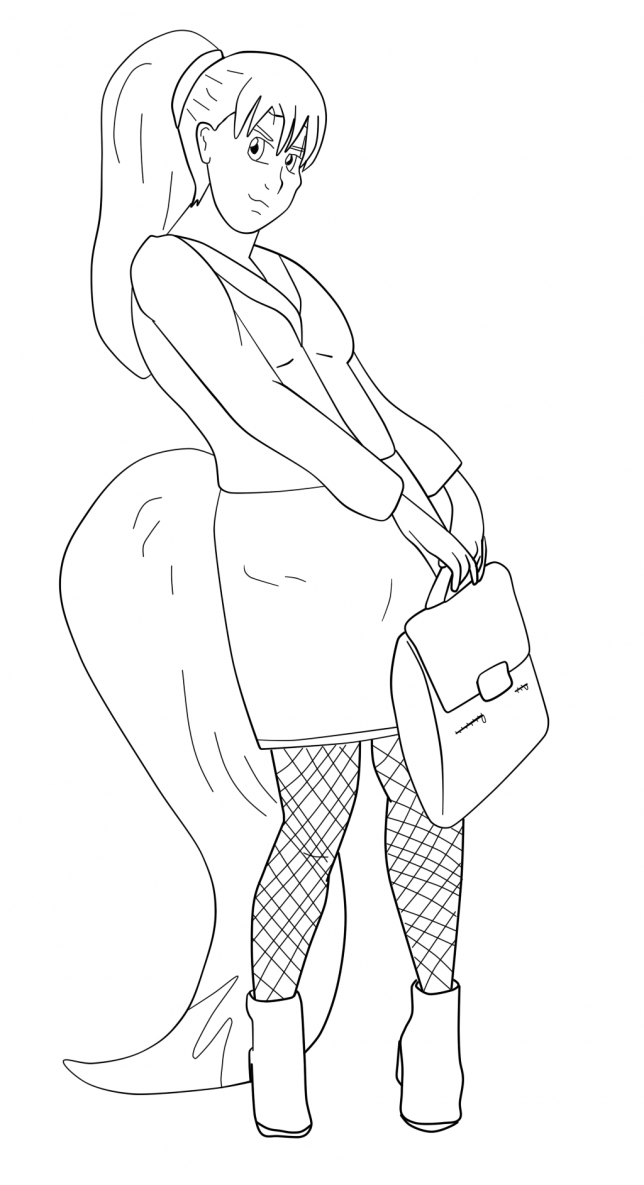 I am now open to Illustration Commissions on this website:

More services are in the works as I draft up what I am willing to do for how much.

I am also working on a Jin model sheet for redoing The Jin Saga comic (or starting a new one like The Jin and Jun Story I started writing). I decided to closely examine some of my favorite fanartists’ work (4-gehiro (WARNING: Some drawings are NSWF!) and istdog). Even so,I may actually go back and redo this as I found another potential reference in Godeater: Resurrection to help with the angles or maybe I’ll load up Tekken 7 and use that. I’m aiming for a younger, smaller Jin at the moment. In any case, here is what I  have on the model sheet so far: 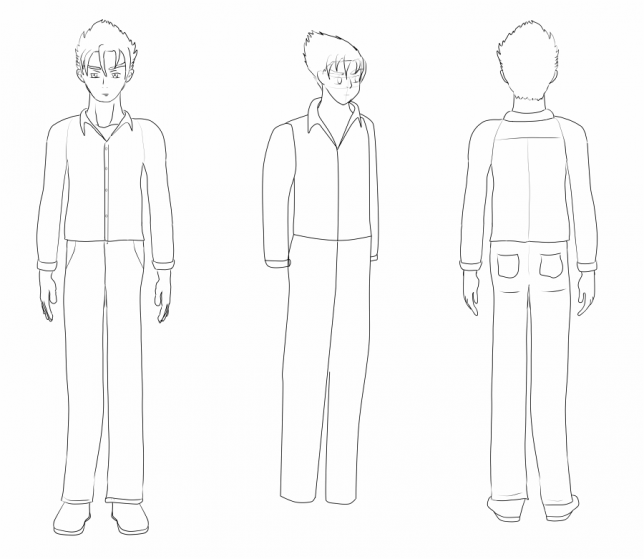 So, looks like May was really busy, and I have plenty to work on in June, provided time and motivation allow.